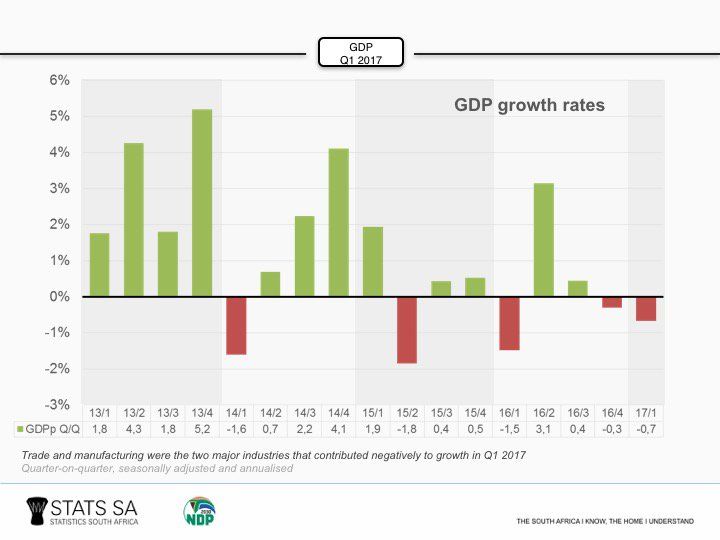 On the back of junk status, we now also have a recession and unexpected or not the economy and consumer have been under severe pressure for a while.

What can the government do?

So very little the government can do and as such I expect this to be a long painful recession rather than short and sharp.

On the personal side, we’ve had since December 2015 to prepare as below;

What’s your thoughts and ideas?

What is the typical duration of a recession based on your experience? How long do you think we (SA) will be in recession?

usually 2-3 quarters, so you're almost out by the time it's confirmed. But I think this one longer as we have less amo to fight it. In the 2008 recession we had space to cut taxes, boost spending and lower artes. This time all we got is rates and I think a stronger Rand.

Bottom line I think this one 4-5 quarters so till end of the year :(

Here's hoping I am very wrong, but even if we get out quick growth goign to be very mdest at best. Sub 1% so recession or not it staying tough

Thanks for the feedback.

One of the businesses I've been involved in is the liqour trade and Jan - Mar quarter was the worst I've experienced in 35 years. The other one that deals with trading with farmers has had the worst 12 months since 1998, that can be put down to the drought of 2015/16 and a third that supplies one of our listed food retailers has showed signs of zero growth the last 3 quarters, year on year. The capex of R75million we were planning on two of our companies has been put on hold indefinitely, which would have meant a few million Rand spent in salaries and wages, back in the economy,and we are small fry. I have no doubt there a billions ready for investment if there was political stability, reduction of crime, especially violent crime,( having had a family member murdered, and a gun held to my head, my daughter and granddaughter hijacked), and this non stop rhetoric of "rad econ trans" and "land exprop without compensation", so I fear we're in for a long, long pull this time. The slide started some time ago but it seems to be gaining both momentum and speed. Not the "prophet of doom" but "realistic"

Well the sad thing is that here in Knysna the builders will be busy for the next 18months....if you have not lived through this you will have no idea of how bad things are.