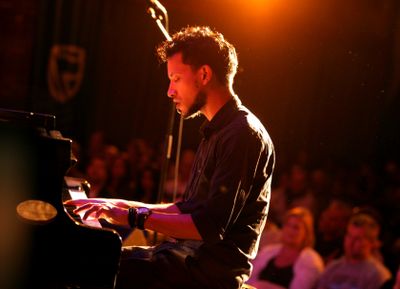 Kyle ShepherdOne hundred musicians from 12 countries will converge in Grahamstown this year to celebrate what is promising to be a spectacular edition of the Standard Bank Jazz Festival. The festival has been going on for 30 years and the bank has supported it for the last two of the three decades. This makes it the oldest jazz festival in the country.

The 10-day long jazz jamboree has over the years become a central groove ingredient at the National Arts Festival. Principally located at the DSG Campus with other satellite venues across the small town, the festival is a host to an impressively wide ranging offering of styles and tastes in jazz and beyond.

This year from 29 June to 8 July, music lovers making the pilgrimage to Jazztown, as Grahamstown is called during the yearly festivities, will witness some of rarest musical collaborations and performances in the festival’s history.

It’s Standard Bank’s 20th anniversary of sponsoring this Jazz Festival and the line-up is accordingly stacked with some of the world’s greatest jazz artists. Australian multi-instrumentalist and composer James Morrison and his Quintet will make their first South African appearance. The incomparable steel-pan genius, Andy Narrel (US) promises to send fans into a swirl with is head-bopping and toe-tapping melodies. The Wizards, a collaboration between two Dutch artists and South African musicians, along with local sure-shots Judith Sephuma, and The Soil are on the bill too.

Zinzi Makeba Lee and Africa Mkhize will share a rare voice and piano performance. Among the reigning league of young lions in South African jazz to look forward to are the prodigiously talented Kyle Shepherd, Thandi Ntuli and Shane Cooper. They have all respectively been criss-crossing the country work-shopping new material recently. The creative fire of the DSG Campus should make for a perfect setting to bring them into unique explosions.

Marcus Wyatt’s Bombshelter Beast will take tune seekers on a thrilling travel into the trumpeter’s musical tone poems too. In what is easy a dare to the jazz police to stretch their tastes and ears, there will be genre bending performances by Jimmy Nevis, Desmond and The Tutus and many others.

If you’re serious about music and jazz, and want an experience sure to stay with you for a lifetime, put the pilgrimage to Jazztown on your bucket list. Better yet, come to Jazztown this year.