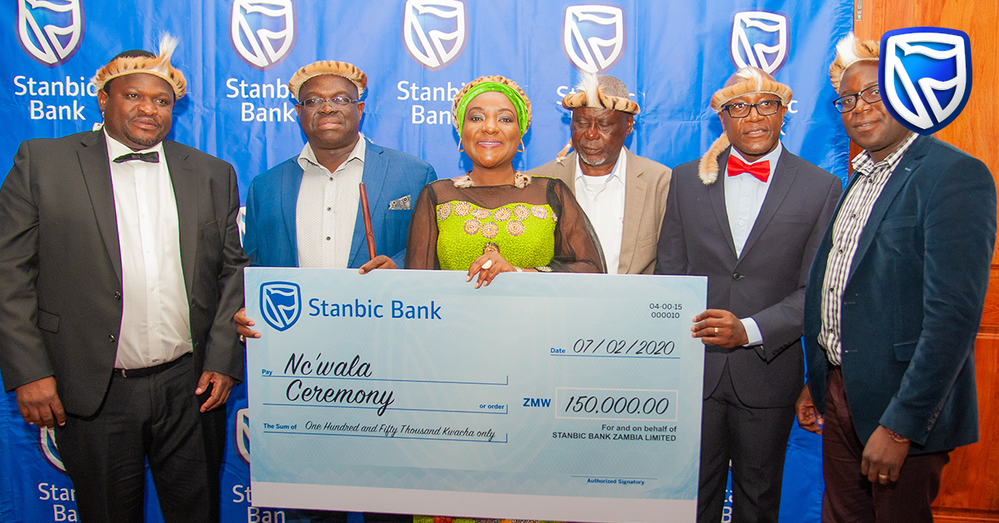 LUSAKA, ZAMBIA - Stanbic Bank Zambia has pumped K150,000 into the hosting of the

2020 N’cwala Traditional Ceremony of the Ngoni. This year’s ceremony is being held under the theme: ‘Conserving our culture, for our heritage.’

The donation was made during a fundraising dinner held at the Mulungushi International Conference Centre in Lusaka on Friday (February 7, 2020).

The event was graced by Acting Minister of Tourism and Arts Hon. Alexander Chiteme, Senior Chief Mzamane and Go Go Mazimawe were among other high-profile dignitaries.

In her opening remarks, N’cwala National Organising Committee Chairperson M'kwinda Sakala expressed gratitude for the support towards the ceremony shown by various stakeholders including Stanbic Bank, adding that it was the committee’s hope that as the first traditional ceremony on Zambia’s calendar year, the N’cwala would set the right tone in showcasing the country’s national unity and cultural preservation.

And when handing over the bank’s donation, Stanbic Bank Zambia Chief Information Officer Wisdom Shanengeta said: “In staying true to our philosophy which states that Zambia is our home and we drive her growth, Stanbic is proud to be the major sponsor of this year’s N’cwala ceremony of the Ngoni.”

He added: “At Stanbic we believe that sustaining the sponsorship of ceremonies like N’cwala is one way in which we can play a role in preserving our national heritage. It is ceremonies like this that safeguard our identity as a people and a nation.

“Stanbic Bank is part of this heritage because we are part of the Zambian society and we identify with the country’s different cultures. As the saying goes, ‘people without culture are a lost people.’ Therefore, our contribution of K150,000 is meant to safeguard and foster the preservation of our own culture as a bank - which is shared by the people of Zambia.”

He said: “Our cultural heritage is a mirror of our national unity. Our diverse cultures unite us as a people. In embracing and celebrating our culture, we must also take an interest in the wider issues like climate change affecting our country.”

He called on citizens and traditional leaders to take keen interest in fighting climate change as it was negatively affecting the country’s rainfed agriculture leading to poor yields.

“As traditional leaders we need to be society’s change agents as we stand ready to develop our communities in a responsible way that will be to the benefit of all,” he said.

And in his keynote address, acting Minister of Tourism Hon. Alexander Chitema said Government was pleased to note that the N’cwala celebrated both the tangible and intangible aspects of Zambia’s cultural heritage.

Hon. Chitema, who was also the event’s guest of honour, urged traditional leaders to maintain the momentum of cultural preservation for future generations.

He noted that: “Traditional ceremonies are not only held to perpetuation and promote our cultural heritage but are also used to create economic opportunities for our people.”

“Such ceremonies remain a dynamic activity for tourism development in Zambia – which is the fourth largest contributor to national GDP. It is for this reason that Government has prioritised the sector as one of the key pillars for economic diversification,” he concluded.

N’cwala is an annual thanksgiving ceremony held by the Ngoni people of Eastern Province to celebrate the year’s first harvest. The ceremony is hosted by Paramount Chief Mpezeni at Mutenguleni village in Chipata.