Astrologists are out of the dark regarding astronomy in Africa

Astrologists are out of the dark regarding astrono... 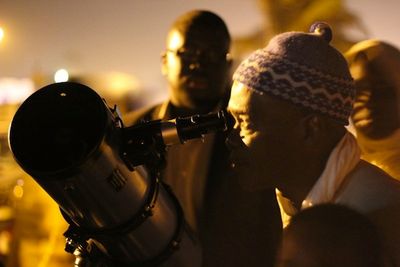 Here on the dusty south-western shores of Lake Turkana, amid the sand and stones, stand large basalt pillars arranged in a circular pattern, the Dancing Stones of Namoratunga; megalithic structures that point to a grand design and purpose by an ancient people from thousands of years ago that most of the world didn’t even know existed.

When archaeologists started examining the Kalokol Pillar site, the basalt pillars reminded them of something else… the entire spectacle had a touch of Stonehenge about it and it led to an incredible theory that pointed to ancient African astronomy; archeoastronomy and an archaic Borana calendar that was thousands of years older and more accurate than any discovered previously in Europe and which seemed to reveal a mathematical ingenuity of the middle-Holocene period of African history that was previously unknown.

For decades astronomers and archaeologists (and the occasional conspiracy theorist) studied the formations at Namoratunga for its astronomical significance, which was further bolstered by similar discoveries across the continent indicating even more ancient calendars with grand purpose. At the time, during the 1970s, archaeologists weren’t in possession of the same carbon dating tools they use today, so Namoratunga was thought to be a few thousand years old – line that up with star constellations at the project time of construction and it appeared as though an astronomical chart or calendar emerged. The problem was that it’s now clear that Namoratunga is much, much older – almost five thousand years in fact – which makes the previous projection moot and irrelevant, alas.

Today the archaeoastronomical aspects of the pillars have been largely debunked, but the fuss around the Turkana stones and the Borana calendar has had an interesting knock-on effect… it’s drawn attention to a deeper investigation of the people who could have created these basalt megaliths and here we’ve discovered something even more fascinating about the genius of our ancient ancestors.

“The construction of the various [pillar sites] around Turkana coincided chronologically with some other significant events,” says Elisabeth Hildebrand, Professor of Anthropology at Stony Brook University and Director of the LPWT team that has been excavating the Turkana sites over the past several years. “One of these was a major climate change in the region that lowered Turkana’s lake levels substantially over a 500 year period, likely affecting fishing... the second major event that happened around this time was the introduction of livestock into the Lake Turkana Basin. Up until 5,000 years ago, everyone around Lake Turkana was a fisher-hunter-gatherer, eating only wild foods… Our dates place the pillar site construction during a transitional period when herding just would have been getting started around the lake.”

It’s a series of discoveries that eclipse the almost prosaic concept of an ancient astrological calendar. It’s an utterly new discovery that defines an idea about the nature of collaboration in ancient Africa – despite massive turmoil, lack of food and climate change our ancestors didn’t resort to violence, instead they found ways to connect and build community.