The Oxford Dictionary defines empathy as “the ability to understand and share in the feelings of another”. This is particularly noteworthy when exploring the works of two artists making up the 54 creators in the Lumières d’Afriques exhibition. This exhibition which showcases 54 artworks by 54 African artists, each representing a country on the African continent explores themes of enlightenment, identity and energy with artworks which highlight issues that are not only integral to the telling of the African story, but as important in understanding aspects of socio-political factors affecting the globe.

Art and empathy have a long history of co-existent collaboration. This ability of art to arise feelings in others and inspire emotion is arguably one of the major contributing factors which draw audiences to experience it. The 54 artworks on show illustrate this symbiotic relationship between art and empathy perfectly; allowing viewers to share in the experience of others and in some way, share in their elations or plight.

However, even though the works contained within this exhibition are records of an African experience as good as, if not better than most, it would be wise not to see this collection of works as being solely relevant to the African condition. This was a sentiment echoed on the exhibition’s opening night by French Ambassador to South Africa, Aurelien Lechevallier, with a reminder that, “The messages conveyed in these art pieces are universal, as much as they are continental”. This is evident in the seven international countries which this exhibition has travelled to before arriving in South Africa.

Narrow the focus of that light onto two of this exhibition’s artists and one is able to understand the intellectual and emotive intensity with which the light of empathy in these works shines. 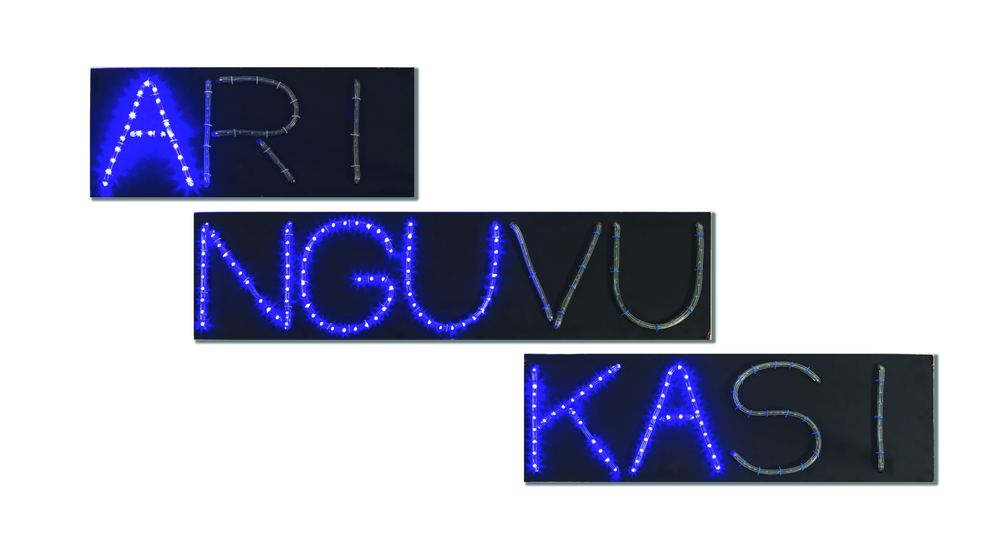 The multidisciplinary Tanzanian artist Rehema Chachage’s piece Anguka (Fall) sees her draw with strings of light on plywood in the creation of a work which does not stray too far from her introspectively cultural and socio-political roots. This particular work drew its inspiration from the most prominent words used in the 2005 Tanzanian election campaign: “Ari, Nguvu and Kasi”, literally translated into, "Zeal, Haste and Strength". The whimsical word play created in these three panels of semi-lit signages transform these political slogans - flashing brighter letters spelling out “NGUKA”, meaning “Fall”. By so doing Chachage comments on the ongoing challenges affecting many African countries regarding access to basic resources despite the abundance of resources the continent and its countries have. This multimedia work speaks loudly as its manipulation of actual light, not only illustrates the effects of not having access to the promise of zeal, haste and strength, but also conveys, through the choice of medium, how these events impact a generation of Africans largely unsuccessful attempts to holistically embrace life in the fourth industry revolution.

This is echoed by seasoned Malian artist, Abdulaye Konate, whose mixed media and textile piece, Homme Nature II, like most of his body of work, draws heavily on traditions and cultures of Mali. Using his art to comment on present day socio-political concerns in much the same way that Chachage uses her individual cultural understanding to comment on broader issues, Konate’s work borrows from traditional Mali society by using fabrics and textile design technics which reference Malian cultural heritage to address a wide scope of global subjects. This understanding of Konate’s work has seen him described as “A kind of shadow minister of the arts” by Chris Dercon, Former Director of the Tate Modern. Homme Nature II (Man of Nature), is no exception to this as it too addresses the concerns of sustainable energy sources.

As both artists work grapple with the challenges of reliable electricity; Chachage, through her medium, which alludes to its unreliability via the varied intensities of light in her piece, and Konate through his experience with power cuts during the creation of his works, advocates for the use of natural power sources.  His colour palette of green blue, black and yellow hint at Konate’s suggestion for Africans to rely more on solar, wind and water-based energy sources. In so-doing encouraging us all to become people of nature.

These two artists who representing geographical polar opposite ends of the continent, similarly occupy opposing approaches to their processes with Chachage’s work taking on a much more non-traditional aesthetic in her modes of artistic creation; while Konate draws heavily from the traditional to inspires his work. Both of these artists exemplify a small sample of the range and variety of artistic African narratives within this exhibition which embody the essence of artistic empathy. Their works portraying how many of the artistic creations on show draw from individual African experiences while simultaneously commenting on global realities which affect us all.

There are the great blog online this is the update for need free skins fortnite join it amazing game zone hope you guys like this way.