Connectivity and Continuity in all things

Connectivity and Continuity in all things

There are few creatives who hold as deep a fascination with the underlying structure of things as Beth Diane Armstrong, this year's Standard Bank Young Artist Award winner for Visual Art.

Armstrong’s work draws inspiration from various structural sources. These may be organic, architectural, mathematical, psychological, or conceptual. She constructs and explores ideas about the nature of connectivity and continuity in all things. Notably, she studies the structures of trees, roots, and rhizomes.  The latter, as a continuously growing horizontal underground stem which puts out lateral shoots and adventitious roots at intervals, provides for a more organic structure than the mechanical look of tree branches that grow above the ground. Rhizomes and their capacity to grow perpetually affords Armstrong the poetic licence and latitude to meditate on never ending and ever creative processes. This as suggested by the title of her new exhibition, in perpetuum. The Latin phrase, “in perpetuum” refers to something that is ongoing or continues forever.

Armstrong’s body of work comprises drawings on paper and sculptures. The former can be considered graphic musings and sketches through which she arrives at the ideas to shape her sculptures out of iron and or twisted metallic wires. Standing next to any of her shiny creations, one is struck not only by their intricate form, by their luxurious finish. Central to the intrigue of Armstrong’s work is its extricate form and apparent intense labour it is required to create.

She reportedly spends extended amounts of time sanding and polishing her intricately woven steel tube thickets. This process may take up to six months on an individual piece. However, the individual work leaving her studio for the exhibition hall does not mark the end of the making of that work. In keeping with the underlying discourse of the show’s title, in perpetuum, the work never stops being created. It merely continues to acquire meaning as it goes through time and space, recreated, and reimagined by each new encounter. 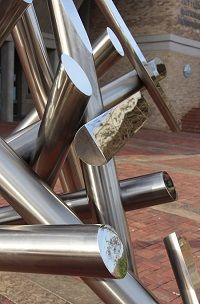 However, the apparent immensity and labour intensity suggested by the work should not mean it is essentially stoical. In fact, far from it. The 32 year old award-winning artist’s work teems with intuition, contemplation, and playfulness. These humanising elements seem defiantly palpable over the dead cold steel finish of her metallic constructs.

Armstrong had a triumphant time at the National Arts Festival where she presented her new work for the first time. Art lovers in Joburg will now get the chance to see her work at the Standard Bank Gallery in downtown Joburg.

Beth Diane Armstrong’s in perpetuum opens to the public on 4 August 2017 and will run until 30 September 2017.

Art lovers can also take advantage of a personal walkabout by Armstrong herself at the Standard Bank Gallery on the following dates.