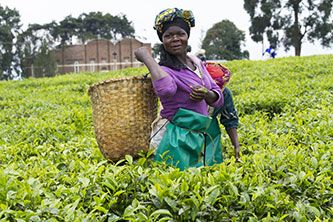 Africa is experiencing a new wave of interest in agriculture as many now venture into the sector - not only for the sake of food production, but also for economic purposes. According to the Food and Agriculture Organization of the United Nations (FAO), cultivatable lands in Africa (excluding forest areas) are three times larger than that currently being cultivated. This offers great potential and many young Africans have seized the opportunity to not only generate income, but to enhance food security, reduce poverty and boost employment levels.

It’s six in the morning and chilly outside, but Emmanuel Muniu is already in his greenhouse spraying tomatoes. Not your typical farmer, the 27-year-old quit his banking job last year to venture into agribusiness. He teamed up with a friend and leased half an acre of land in Kiambu, a town only a few minutes’ drive from Kenya’s capital, Nairobi. After leaving their city jobs, the two learned the art of farming by visiting other farmers, as well as interacting with their customers in a local market.

According to Emmanuel, engaging fully in agriculture has generated positive results; he now understands his crops, the seasons and his market. He also asserts that farming is a good venture for young people to participate in as their main source of income.

Hundreds of kilometres away from Nairobi in Mogotio, we find another young farmer, Joyce Macharia. Realising that banana farmers in Kenya couldn’t rely solely on government institutions to provide them with banana seedlings exactly when they needed them, the mother of two decided to start a pilot project on a small farm, nurturing said seedlings. After it succeeded, she expanded and embarked on a mission to market her products to farmers who only thought they could get good seedlings from the government institute.

In the future, Joyce intends to start value additions like milling the bananas into flour to sell, and plans to form farming cooperatives to attract good market and bargaining power. She adds that there is great potential in agriculture and encourages the youth to venture into it, saying, “With agriculture you will never go wrong, because people need food.”

Emerging, ambitious entrepreneurs like Emmanuel and Joyce are why the Standard Bank Group has been committed to the agricultural sector for over 150 years. With us as a facilitator, we believe that the continent can be a bread basket to the world - capable of sustaining itself through successful development initiatives and uplifting communities throughout society.