Living the Joy of Jazz

Living the Joy of Jazz

What happens when you take some of South Africa’s most talented young musicians and put them on a stage overlooking one of Joburg’s busiest intersections in evening traffic? You get a unique auditory experience and a taste of what’s to come in the world of jazz over the coming weeks.

On Tuesday September 1, the Standard Bank National Youth Jazz Band, directed by the baton of celebrated bassist Concord Nkabinde, provided the soundtrack for homebound motorists from an elevated billboard on the corner of William Nicol Drive and Republic Road. This while the beautiful Spring Day sunset gleamed over the Sandton CBD, the home of the Standard Bank Joy of Jazz, South Africa’s premier jazz festival which takes place from September 24-26.

As cars lined up bumper to bumper, crawling along William Nicol Drive to make their way home to the ’burbs in and around Sandton, they were directed to tune into 100MHz to listen to the music as they watched the band perform above the intersection. Some motorists hooted in appreciation, and every driver’s gaze was fixed firmly on the spectacle playing out against the dusty-pink backdrop of spring dusk. Some even pulled over at the side of the road, after they’d passed through the traffic lights, to soak up the experience.

Over the years, the Standard Bank National Youth Jazz Band has been a prolific breeding ground for some of South Africa’s most established musicians, from mesmerising drummer Kesivan Naidoo to the prodigious talent of pianist Kyle Shepherd. After hearing what the new eight-piece ensemble has to offer, there’s no doubt the future of South African jazz is in the most capable young hands out there, and that this fresh crop of talented young musicians will have no problem introducing the genre to a new generation of enthusiasts.

And as Dalisu Ndlazi’s sumptuous bassline could be heard in the distance as the event concluded at nightfall, a gentle warmness confirmed that jazz season has well and truly arrived. 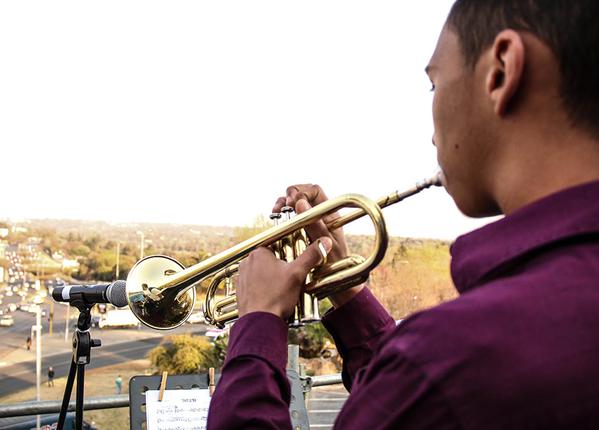 I wonder how much they have accomplished professionally.

This is one of the interesting and fascinating things about Jazz music. One of my favorite jazz legends is Mozart.

The ringtones made from jazz songs are also quite amazing. I often use and search them on KlingeltonKostenlos