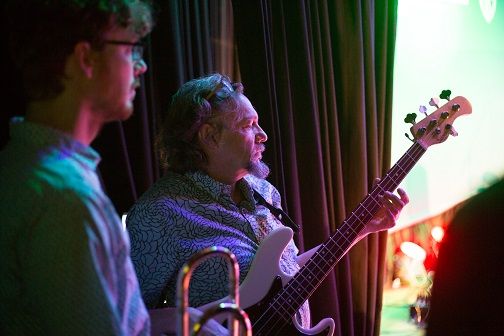 There is a new energy in #JazzTown as a second wave of art lovers descend on Grahamstown. The many young musicians who spent the first 7 days of the National Arts Festival partaking in workshops are gone. They’ve been replaced by a generally older crowd of music lovers out for jive and not swotting. However, there’s an equally electric air of expectation as the queue meanders into DSG Hall to see Carlo Mombelli take a collaborative quartet to the spotlighted board.

The gig was sold as a quintet offering. The band was to feature Mombelli on bass and Sphelelo Mazibuko on drums. The two South Africans shared honours with Swiss players: Floriane Favre on piano, Andreas Tschopp on trombone. The fifth member, saxophonist Floriene Egli was however pulled off the bill. The news is that an injury sustained a few weeks ago on a biking accident has become inflamed and the pain was keeping him from playing. This had an implication on the sound of the night. However, the need to adapt to abrupt changes is central to jazz. Egli’s compositions are played and he is mentioned and tanked at every turn. Song after song the audience is treated to successive spirited takes of charts from both Mombelli and the European collaborators.

Notably, Mombelli opens each piece with a story. Like his childhood memories of his father’s round face peering through the round window of a kitchen door to check up on young Mombelli and his sister. They were staying in a hotel and would have breakfast in the dining hall under the watchful eye of their chef father. It’s an expansive sound portrait. It has Egli taping up the piano head to affect the sound. He even reaches into its belly to pluck at its strings. Tschopp’s trombone burps and bellows with dabs of sound. It’s a feat of experimentation. They take the instrument into unusual places. This is vintage Mombelli. At different points in the playing respective members of the ensemble enter into scintillating dialogues and improvised exchanges. They weave around each other like suspicious cougars bragging about the same new young lovers.

Mazibuko, who is on stage for his second time with Mombelli, gives an inspired account of his presence. There’s a tambourine to bump the sound with his cymbal. Hand claps and snare slaps augment the tap-tap of the bass pedal. There are flurries of complex rhythm to match Mombelli’s wavy sting work. The bass man offers his twirling lines and spirals of notes bent to the edge of strange. The audience gasps and offers a burst of ovation at every solo’s end. We thought Mombelli was great he is better than that.