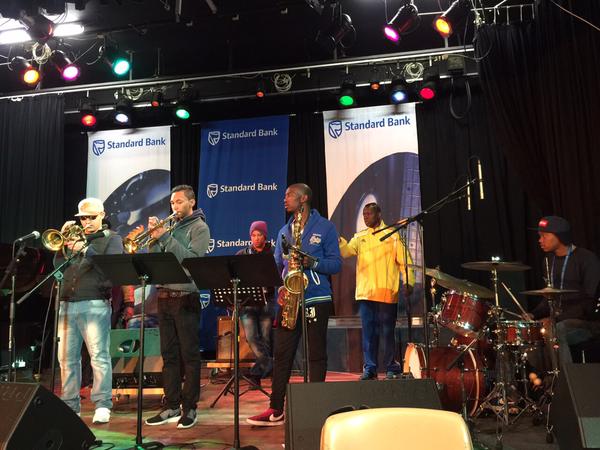 TheNational Arts Festival 2015 (NAF) opened to throngs of enthusiastic music and art lovers eager to take full advantage of the festival’s opening weekend programme. Here is a round-up of some of the highlights.

Lionel Loueke, the talented Benin guitarist’s much anticipated performance received thunderous applause and calls for an encore. Lionel Loueke, who is based in New-York, played to a packed DSG Hall and was the first international act to take the stage at the 2015 Standard Bank National Jazz Festival. His game-changing solo showcasing singing and chanting, deeply rooted in ancient Benin culture, left the audience captivated. Loueke was also joined on stage by bassist Concord Nkabinde, who is well-known as the Standard Bank Young Artist of the Year for Jazz in 2006. Together they brought down the house with their thrilling duet.

Benjamin Jephta, bassist and composer presented music from his latest album, Homecoming. Formerly from Cape Town but now based in Johannesburg, Jephta’s set included drummer Sphelelo Mazibuko, Sisonke Xonti on tenor sax, Marcus Wyatt on trumpet and the 2014 Standard Bank Young Artist for Jazz, Kyle Shepherd on piano. His music revealed his journey of discovering jazz. In his repertoire, he dedicated compositions to elder jazz musicians like Feya Faku and Carlo Mombelli for inspiring him to be a jazz artist.

The Standard Bank Rhythm Booth featuring impromptu performances by local artists is fast-gaining popularity amongst festival-goers. Pianist, Nduduzo Makhathini, singer Nomfundo Xaluva and Concord Nkabinde among others have taken to the stage.

Music lovers have also been invited to use the Oculus Rift at the Standard Bank Rhythm Booth. It’s a device that uses digital technology to provide an enhanced experience of the musical performances. As the user enjoys the show, their heart rate is measured to test their body’s reaction to the music. This proves without doubt that the music is best enjoyed live, because: the closer people are to a performance, the more they feel.

A Portrait of Myself as My Father is choreographed by Zimbabwean-born New Yorker, Nora Chipaumire.   She and her Zimbabwean dance troupe delivered a fresh and energetic dance narrative about African masculinity as defined and impacted by cultural traditions, colonialism, religion and liberation struggles.

Masculine mannerisms like the puffed chest, proud folded arms and stomping feet of self-assuredness are commonplace in this choreography. The movement also draws inspiration from traditional warrior dances and military training exercises and is set to a mix of urban Zimbabwean beats and Chimurenga music – a reference to Zimbabwe’s liberation struggle songs.

History Will Break your Heart is the solo exhibit of reigning Standard Bank Young Artist of The Year for Visual Art, Kemang Wa Lehulere. His work weaves in the life stories of two inspiring and historic South African artists. The one is Ernest Mancoba who died in Paris having had an immensely successful career as an artist. He was a co-architect of the avant-garde art movement in France and a visionary abstract painter. The other is Gladys Mgundlandlu who was one of the first black female painters to ever be exhibited in South Africa. They both seem to have been forgotten by the local art public since passing on.

The exhibition includes a rare interview with Mancoba before he died. There is an interview with Lehulere’s aunt who knew Mgundlandlu as a child as well as an interview with an art restorer who was enlisted to uncover murals in Mgudlandlu’s former home in Gugulethu, Cape Town. One of the installations includes the late painter’s landscape paintings. Soon after winning the Standard Bank Young Artist of the Year Award, Lehulere heard Mgundlandlu’s work was going on auction in London. He bought the paintings and has now used them as a material element of his own work. Lehulere has brought an almost forgotten artist back into public focus and reclaims her memory for a younger generation of artists and art lovers alike.

The Elder of Azania is presented by Athi-Patra Ruga, the winner of the 2015 Standard Bank Young Artist of the Year for Performance Art. The unworldly spectacle is an instalment belonging to a larger body of work titled “The Future White Women of Azania” that explores the body in relation to structure, ideology and politics.

Audiences are immersed into an imagined world of colour that is meant to disrupt and bring attention to issues of racism, gender and sexual identity. This is one is a feast for the eyes.

The Children’s Art Festival is also underway with primary school pupils from around Grahamstown participating in various shows and art activities. At regular intervals a select group of these talented youngsters take part in the Standard Bank Art Workshop for children. This includes a painting competition where they listen to a selection of classic jazz hits and are asked to create a visual impression of the music.

Follow @StandardBankArt on Twitter for the latest #NAF2015 highlights. The National Arts Festival runs from the 2 to 12 July 2015.