Nam Paralympian aims to house homeless with our help

Nam Paralympian aims to house homeless with our he...

No one would disagree that Paralympic athletes are truly remarkable individuals; they overcome physical hardships to achieve their ambitions, regularly pushing their bodies passed the point of average endurance, and accomplishing feats that the able-bodied mostly cannot and will not.

When it comes to athletics, Africa is blessed. Our people are gifted with natural sporting abilities that are obvious and lauded in every continental and inter-continental event, and our Paralympians are often the epitome this physical grace. Namibian Ananias Shikongo is one such Paralympian. 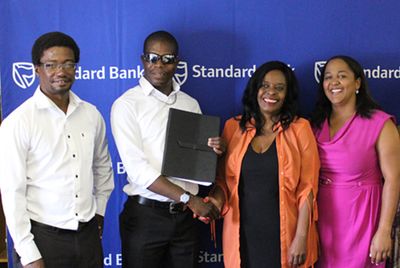 Born in a small rural village in northern Namibia almost 31 years ago, Ananias tragically lost his eyesight when he was a small child; first the left eye in a bow-and-arrow accident at the age of three, then, three years later, the right eye after being kicked by a donkey. Despite this, the young sprinter’s courage, perseverance and natural talent saw him become one of his country’s greatest sportsmen, competing and excelling in events all over the world and eventually being declared the Namibian champion (2010), the African champion (2015) and last year’s Rio Paralympic Record Holder.

Early this year, the African sprinting champion added yet another honour to his ever-growing list of achievements: on 13 January, Ananias was announced as the ambassador for Standard Bank Namibia’s Buy-a-Brick initiative, a community-based project that raised funds from both the public and private sectors to enable residents of low-income households to build decent dwellings for themselves and their families.

To date, our Namibian subsidiary has raised a total of R1.4 million to build 40 new houses. So far, 17 houses have been built, and the remaining are expected to be completed by March.

“I am really grateful and would like to thank Standard Bank for realising that athletes living with a disability can also make a change in society, and that is what I plan to do for the duration of this partnership,” shares Ananias. “[Buy-a-Brick is a] great project that aims to house as many Namibians as possible and I would like to join that effort, along with Standard Bank.”