Throughout our history we have reached many milestones.  In 2012 we celebrated our 150th anniversary as a bank and now we can proudly celebrate one more milestone: Standard Bank Group has been in the business of banking in Namibia for 100 years.

In 1915, just a year after the First World War broke out, we set up in the diamond-rich desert territory of Namibia. The first branch opened in Luderitz and was followed closely by branches in Windhoek and Swakopmund. The banking operations in Namibia was controlled from South Africa in the beginning until a subsidiary company, today known as Standard Bank Namibia, was established.

As one of Namibia’s oldest companies, we are proud to be part of the changing face of Namibia and today we still remain focused on providing people with financial solutions that enable them to enrich their lives.

We've come a long since our first Namibian branch in Windhoek as photographed in 1915.

For more about Standard Bank Namibia go to www.standardbank.com.na. 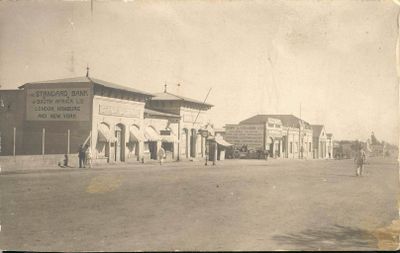