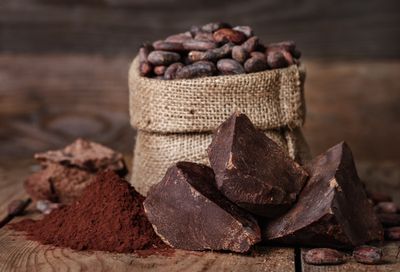 With demand for chocolate at an all time high, the industry is booming and is now valued at over US $100 billion. Leading manufacturers post impressive profits each year as appetite for the sweet treat grows. But have you ever wondered where the finished product starts its journey before it finds its way into your mouth?

Keeping the global confectionery business thriving and the world’s sweet tooth satisfied are four West African nations: Côte d’Ivoire, Ghana, Nigeria, and Cameroon, who are the world’s largest producers and exporters of cocoa, the main ingredient in chocolate. More than 70% of the world’s cocoa comes from the region, with Côte d’Ivoire and Ghana jointly supplying 60% of the global total.

Cocoa production continues to be an important economic driver for the West African countries, with cocoa beans remaining the chief agricultural export for countries like Ghana and Nigeria.

The cocoa plant is a small tree that grows in deep tropical regions where the climate is warm, and the soil is fertile and well-drained. Farmers use machetes to harvest, cutting off ripe pods from the trees. The lack of machinery means everything from planting to harvesting is done manually.

After the pods are cut from the trees, they are split open, and the seeds are taken out. The seeds go through a two-step process before they become proper cocoa beans. First, they are piled and covered with tree leaves before being left to ferment for four to five days. After that, they are dried for about a week. From there, the beans are ready to be sold or exported, with the majority of them ending up in Europe and the US. The increasing number of consumers in China, Brazil, and India is also creating the demand for the beans.

In all of Africa’s cocoa-producing countries, small-scale farmers are responsible for the production of the unique plant. In Ghana, they comprise nearly 85% of the industry, with the majority of them living in small villages across the country. The cocoa sector contributes about 15% of Ghana’s GDP. In a country of about 28 million people, nearly 25 to 30 percent of the population relies on the sector for employment.

As the world’s second largest cocoa exporter, Ghana produces nearly a million tonnes every year, with 2015’s output sitting at more than 800,000. If you want to understand further how valued the country’s second-most-important commodity after gold is, just look at the Ghanaian money, and you’ll see cocoa pods displayed as a symbol of national pride.

In Nigeria, many farmers gave up on the trade in the 1980s after commodity prices plummeted. The agricultural industry was further destabilised by a lack of investment as government prioritised spending on the country’s booming oil sector. But now, as Nigeria continues to grapple with high unemployment levels and a struggling economy, the government has been focusing more on cocoa production in an attempt to create jobs and boost the economy. There are more than 300,000 cocoa farmers in the country, most of whom live in the rural areas.

Nigeria’s goal is to increase production to 1 million tonnes a year by 2018, and ultimately be the largest cocoa producer on the continent by 2020. It’s an ambitious target. To achieve it, the Nigerian government has been training farmers, supplying them with cocoa trees, and distributing disease-resistant seeds, fertilisers, and other chemicals at low prices. The ministry of agriculture also plans to plant 2 million cocoa trees by 2019.