Though currently going through a tough phase in its development, China is applying clever tactics to fire up its economic engine. As a critical trading partner, Africa would do well to consider these tactics, but also remain aware of how it needs to adapt to succeed in the future. 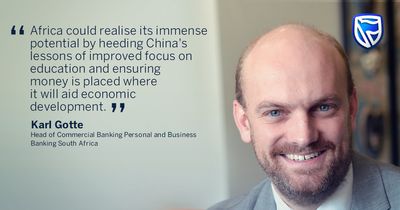 Karl Gotte, Head of Commercial Banking Personal and Business Banking South Africa.In China, productivity gains are becoming the main engine of living-standard improvements. This subsequently calls for the encouragement of innovation and entrepreneurship to grow its main industries; a strong focus on education; and targeted policies aimed at industrial and business sectors that need advancement.

Yet, this large-scale infrastructure spending will only partly make up for slowing business investment in China, as overcapacity is being worked off in several industries. Furthermore, real estate investment is also declining, with talk of a potential housing bubble. Fortunately, China’s lowered barriers to entry have spurred entrepreneurial activity, and policies are shifting towards supply-side reforms that champion sustainable development. The country’s continuing reallocation of labour from agriculture to industry and services is also seen as a major driver of inclusive productivity growth.

Though the above developments are thanks to market reforms initiated as far back as 1978, the country still remains a developing one, with 70.17 million poor people in rural areas in 2014. However, the World Bank reports that China’s GDP growth has averaged nearly 10 percent a year—the fastest sustained expansion by a major economy in history—and has lifted more than 800 million people out of poverty.

What’s often left out in discussions about China’s outlook is the crucial role that education and up-skilling the workforce play in achieving success; the vital part that the financial and banking sectors play in facilitating the efficient sourcing of funds; and the need for collaboration:  Chinese state-owned enterprises are viewed as strategic levers that encourage deeper levels of growth, improving essential access to markets and infrastructure, and, so, encourage growth in targeted areas.

Perhaps Africa could realise its immense potential by heeding these lessons of improved focus on education and ensuring money is placed where it will aid economic development. However, this cannot be done in isolation, that’s why South Africa’s CEO initiative - which includes Standard Bank as a key partner - commits to facilitating economic progress by driving change and social development together with government and labour.

As the largest bank by assets on the continent, we take our role as a growth facilitator seriously, because when Africa wins, we win. For Africa, the success stories of China are important to scrutinise. But, Africa has its own unique economic environment - an environment that we at Standard Bank understand and can altruistically exploit by helping key stakeholders build and adopt a strategy that will grow the continent’s commercial hubs so all may benefit.