Africa’s art landscape is packed with tremendously talented artists who are gaining prominence locally and abroad. From Ghana to Kenya, Mozambique to Egypt, there’s a generation of painters, sculptors, photographers, and installation artists whose work will astound you. Don’t just take our word for it – check it out yourself. 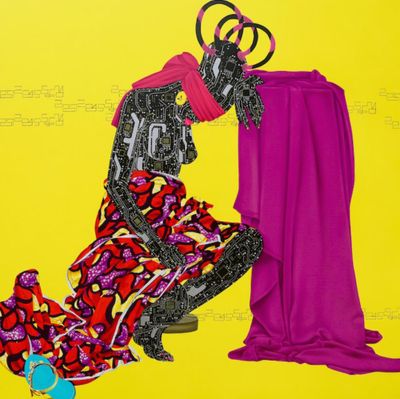 Born in 1991 in Kinshasa, Democratic Republic of Congo, Eddy Ilunga is one of the extraordinarily talented young artists Africa has to offer. The painter’s bourgeoning fame can be attributed to his bright acrylic paintings that showcase the continent’s unique art flavour. His work appears to be influenced by fashion photography and Congolese aesthetics, making use of heavy textures and patterns to merge pop culture references such as music and fashion.

With an interest in history and culture, Eddy’s recent project, entitled Mangbetu, is a tribute to the Congolese tribe of the same name. The Mangbetu are an indigenous tribe whose culture teeters on the brink of erosion, thanks to the unstoppable force of modernisation. To highlight their plight, Eddy created characters with circuit boards coated as skin, while wrapped in vivid garments printed with traditional Mangbetu patterns.

Eddy’s work has been exhibited across the world, notably in London and New York. In Africa, he has shown his creations at several exhibitions, including Dak’Art, a prominent contemporary exhibition held once every two years in Dakar, Senegal. 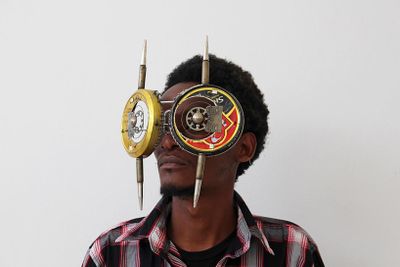 Cyrus Karibu uses his talents and creativity to turn trash into cash. The Nairobi-born sculptor is known for his skill of transforming waste into fascinating pieces of art. Give him anything from old bicycle parts to a discarded spoon, or even a tin of shoe polish, and he’ll create something magical, like stylish, flamboyant glasses. It’s these glasses, called C-Stunners, that have earned Cyrus the recognition he deserves.

His glasses, which are available both as sculptures and photographs, is both creative and playful. Cyrus explains that his love for glasses started at a young age: “When I was young I used to admire real glasses but my dad was a bit harsh and he never wanted me to have real glasses. That’s the reason I started making the glasses.” 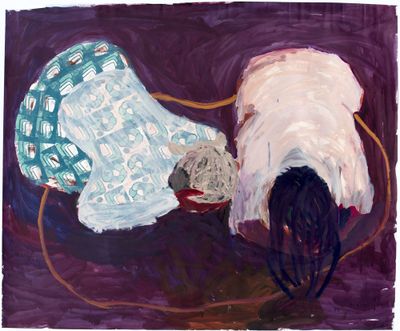 It’s almost impossible to gaze at Portia Zvavahera’s creations and not feel a pang of emotion. Her masterful use of colour, pattern, and texture gives her paintings a life of their own. The Zimbabwean artist’s work chiefly features women characters and explores issues around spirituality, marriage, and child birth. The bold and powerful colours give these characters a unique realness, their distress or joy almost tangible.

The 31-year-old painter draws inspiration from her dreams and life experiences. She sleeps with a sketchbook under her pillow, sketching out whatever she dreams about and later brings it to life in powerful configurations. Her new body of work, I can Feel It in My Eyes, drips with passion and sensuality, depicting couples locked in kisses amid a sea of flowers.

Born in Juru, a small town in Zimbabwe, Portia represented her country at the 55th Venice Biennale in 2013, and her work has also been exhibited at the Institute of Contemporary Art Indian Ocean in Mauritius. 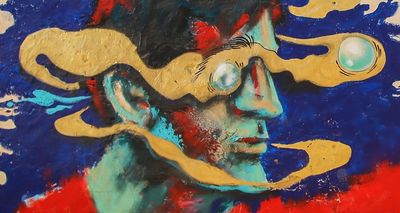 The Egyptian art scene is a highly competitive space that boasts an endless list of artists with international acclaim. Aya Tarek is one of the new wave of young street artists making a lot of noise in the country renowned for its deeply rich art history. Her mediums are mainly graffiti and paint.

Although street art in Egypt largely gained considerable international attention after the 2011 uprisings, Tarek, 27, began sharing her work on the walls of Alexandria in 2008. Inspired by her grandfather, who was a graphic designer and painter of film posters in the 1960s, Tarek decided to pursue art and graduated with a Bachelor of Fine Arts from Alexandria University.

As with many Egyptian artists, some of Aya’s work is laced with political undertones. Although shying away from being excessively political, she admits that whether you’re an artist or not, you’re bound to be political at some point. “I used to say I’m not political, but I realised that everything you do is political. Walking down the street is political. So, it is political, but it doesn't have to be propaganda,” she says. 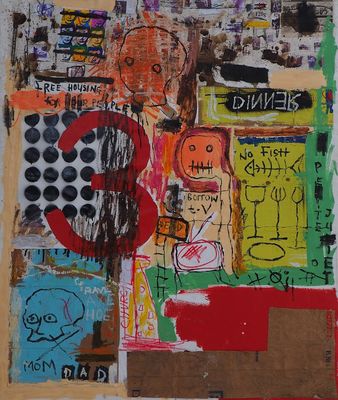 There’s a gritty, chaotic feel to the Ghanaian artist’s artworks, which brings to mind the work of American Neo-Expressionist artist, Jean-Michel Basquiat. Using an array of mediums, including painting, sculpture, and installation art, Gideon conveys his fascination with themes such as pop culture, race, and anxiety.

His penchant for art developed at a young age, and in 2012 he obtained his Bachelor of Arts Degree from Kwame Nkrumah University of Science and Technology. Since the completion of his studies, the 28-year-old artist has been making notable strides in developing his career. He has participated in numerous exhibitions in Ghana, and in 2015, he was the winner of the first Merit Award at the 30th edition of the L’Atelier competition organised by Barclays Africa. 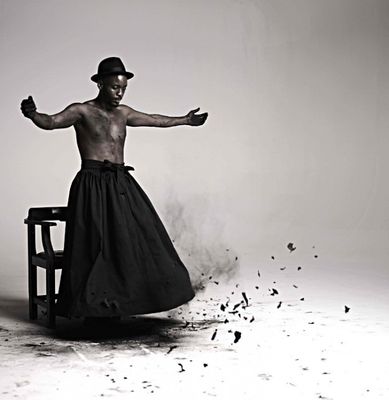 Mohau Modisakeng, 30, is a talented artist who works primarily as a sculptor, but also dabbles in photography, video, and performance. Born in Soweto, Johannesburg, Mohau graduated from the Michealis School of Fine Art at the University of Cape Town.

Seeing the effects of political violence and poverty at a young age, Mohau started drawing to channel his observations and feelings. His work is largely influenced by South African history, touching on the country’s harsh past of oppression and segregation, and its effects today, with violence being a recurring theme in his work.

Mohau has captivated art lovers all over the world. In 2014, he held solo exhibitions in Austria and Germany. His work has also been exhibited in Nigeria, Canada, Italy, and England. 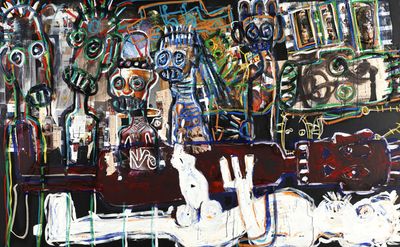 Abdoulaye Diarrassouba, known as Aboudia, is rapidly morphing into one of Côte d’Ivoire’s most celebrated artists. He is famous for his big canvases of haunting, ghostly figures of children with bulging eyes and gaping mouths. His paintings, which tell tales of chaos and violence, are largely observations from the civil war that gripped the west African country in 2011.

“My work is similar to that of a journalist writing an article. I was simply describing a situation, in order to create a record of my country’s recent history,” says Aboudia. “I’m an ambassador of the children – they do writings on the walls, their wishes, their fears, I’m doing the same on my canvas. I’m like a megaphone for these children.”

His work caught the attention of international audiences in 2011, and today, he has exhibited across Africa, Europe, and the United States. His paintings reportedly cost anything from US$12,000 to $20,000. 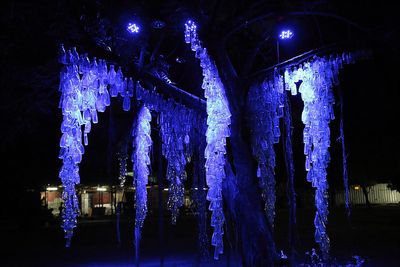 Stacey Abe started painting at the age of nine and sold her first piece of art when she was still a high school student. She has since developed into an artist driven by passion and an urge to challenge gender misconceptions and inspire other women to pursue their dreams.

While she started out as a painter, the Ugandan artist has acquired a profound passion in sculpture, mainly working with glass. She began experimenting with glass in school as a way of finding something unique and that she can call her own. Explaining her love for glass as a medium, she says “it illustrates both the fragility and defiance in [my] personal experience as a sculptor.”

Stacey looks up to renowned Japanese sculptor Sayaka Ganz for her remarkable ability of turning discarded material like plastic and metal into astonishing life-like animal figures. 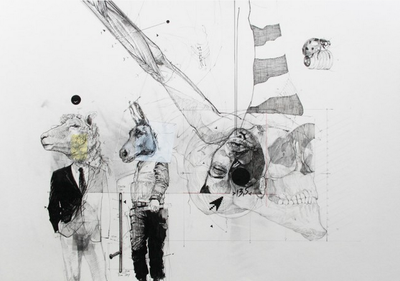 Born in 1985 in Tunisia, Nidhal Chamekh started exhibiting his artworks locally at the age of 12. Today, following years of hard work and dedication, his name is known beyond African borders.

Whether it’s design, photography or installation, Nidhal’s art is deeply influenced by his family’s background and his childhood neighbourhood in the capital Tunis. Growing up in a family of activists, Nidhal adopted a rebellious spirit and a political voice. His father, an untiring advocate of free expression, was sent to prison several times when Tunisia was under the rule of Habib Bourguiba. This impacted Nidhal’s view on politics and art.

“This helped me to paradoxically develop a more objective view on politics. The fact of easily going beyond simple politics and simple topics. It is in me. The most important thing in a work of art is to convey a political or social message without limiting the work to a simple message,” he explains. 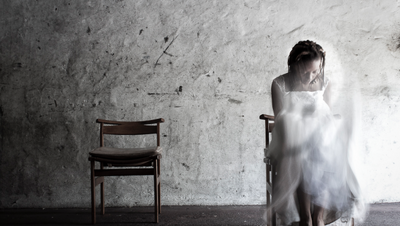 Euridice Kala’s work takes on many forms. Whether it’s installations, photography or video, her work is gripping and impactful. Her love for African history and culture is apparent in most of her art pieces. With themes that speak a great deal about appropriation of Mozambican and African culture, Euridice’s work has endeared her to multitudes of art lovers across the continent.

She has showcased her work in Cameroon, South Africa, and Senegal. She has also wowed audiences in across Europe, including in France, Netherlands, and Portugal.

Born in Maputo, Euridice shares her time between the Mozambican capital and Johannesburg, South Africa.