Architecture cropping up in Africa is achieving international acclaim for some of the most innovative and sustainable building designs in the world. In some cases it is a single building that has been designed to minimise impact on the environment or cope with environmental challenges.

In other cases the architecture involves a concerted effort among companies, individuals, and at times the government, to deal with certain demands such as urbanisation or climate change or as a form of modernisation to accommodate new economic aspirations.

Whatever the challenge, or inspiration, these designs all solve a problem and give food for thought on the future of construction in Africa.

Located at Cape Town’s commercial V&A Waterfront, the Moyo Waterfront Restaurant and Urban Farm is a futuristic concept which tells the story of food in its full cycle. Starting from the growth of food, to it being traded as commodities, followed by the culinary experience of cooking and preparation of food, to its consumption, and finally as organic waste that can be used as fertiliser to complete the cycle.

Using sustainable technologies the design, by Tsai Design Studio, consists of; a market arcade covered by an array of solar panels that powers the stalls during the day, it also doubles as shading device for the space below, the market stalls are a cluster of pre-fab modular units, and the urban farm uses an aquaponic system developed for the project, offering fresh off-the-wall greens, vegetables as well as tilapia fish for the restaurant. 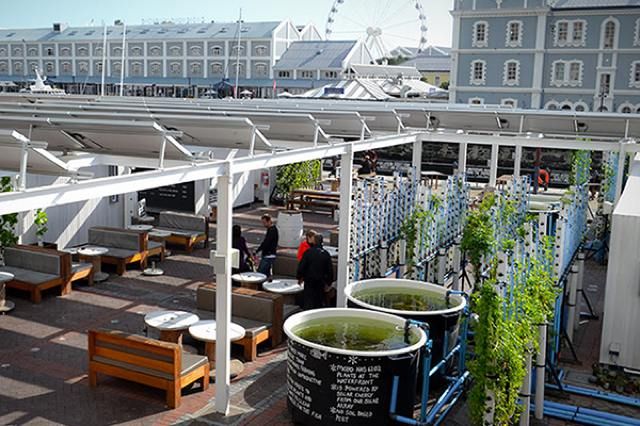 Named “the Greenest School on Earth” in 2013, PITCHAfrica transformed the Uaso Nyiro Primary School, in arid Northern Kenya, into a Waterbank School. This is an alternative low-cost school designed for the Laikipia region which has insufficient access to water and rainfall of approximately 600mm annually.

The school, built from local materials with local labor for the same cost as a conventional linear school, stores and filters clean water for 700 children year round - using a centrally located reservoir and filtration systems integrated in the perimeter wall, it also provides protected gardens for growing fresh vegetables and includes a community workshop and a courtyard theatre for community gatherings. It should be noted that PITCHAfrica also completed the construction of PITCHKenya in Laikipia this year. This is a rainwater-harvesting soccer and volleyball stadium at the Endana Secondary School that can store more than 1.5 million litres of fresh water.

The Mauritius Commercial Bank is the first building in the southern hemisphere to receive a BREEAM rating - the world’s foremost environmental assessment method and rating system for buildings.

The building, located on the outskirts of Port Louis, minimises its energy consumption by making use of free cooling where possible, low energy lighting and a 980m² photovoltaic farm makes use of solar energy, providing further renewable energy. Rainwater is harvested and stored in below-ground concrete tanks and fresh air is provided using a floor displacement ventilation system. It uses recycled products in all its furniture and flooring. 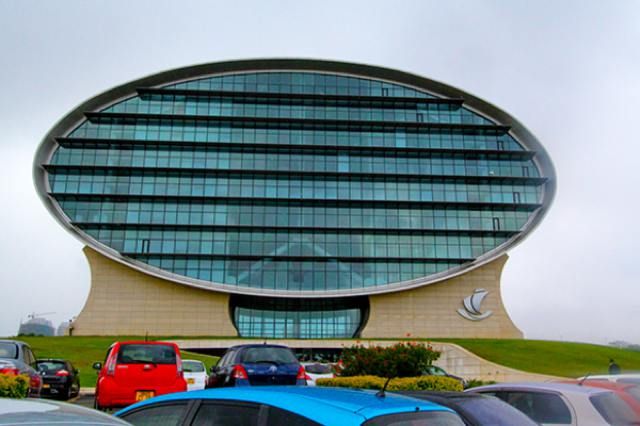 Kunlé Adeyemi is a Nigerian architect and urbanist - heavily influenced by the fast-paced urbanisation of African cities. In 2013 Adeyemi completed the “Makoko Floating School”, a prototype floating structure, built for the water community of Makoko, located on the lagoon heart of Nigeria’s largest city, Lagos. This pilot project took an innovative approach to address the community’s social and physical needs in view of the impact of climate change and a rapidly urbanising context.

At a cost of less than $7,000 the school accommodates 100 students, uses 256 plastic drums to keep it resting on top of the water, and the frame is constructed from locally-sourced wood. Electricity is provided by solar panels on the roof, and rainwater harvesting helps to keep toilets operational. Adeyemi has been able to produce an ecologically friendly, alternative building system that could revolutionise Africa’s urban water societies. One of his recent projects has focused on his homeland and its fast urbanisation rate.

Read part 1 of this story by clicking here