Witness the Standard Bank Young Artist 2021’s PRIDE in everything at this year’s NAF.

If you are fortunate enough to be in Makhanda over the next two weeks, you may consider taking in a 2022 Standard Bank Young Artist who prevailed in the category of Performance Art at the SBYA awards last year, Gavin Krastin. Gavin’s enterprising project titled 12 Labours is made up of a series of interdisciplinary pieces -12 to be exact- that incorporate petrol stove acts and community interventions.

“The project reimagines the toxicity of conventional understandings of ‘heroism’ and ‘masculinity’ through the adapting of the classic Greek tale of The Twelve Labours of Hercules.”

This production features a troop of queer garden gnomes who band together with local artisans, gardeners, and contractors, collectively performing a sequence of actions centred on notions of community building and igniting feelings of gratitude and joy. 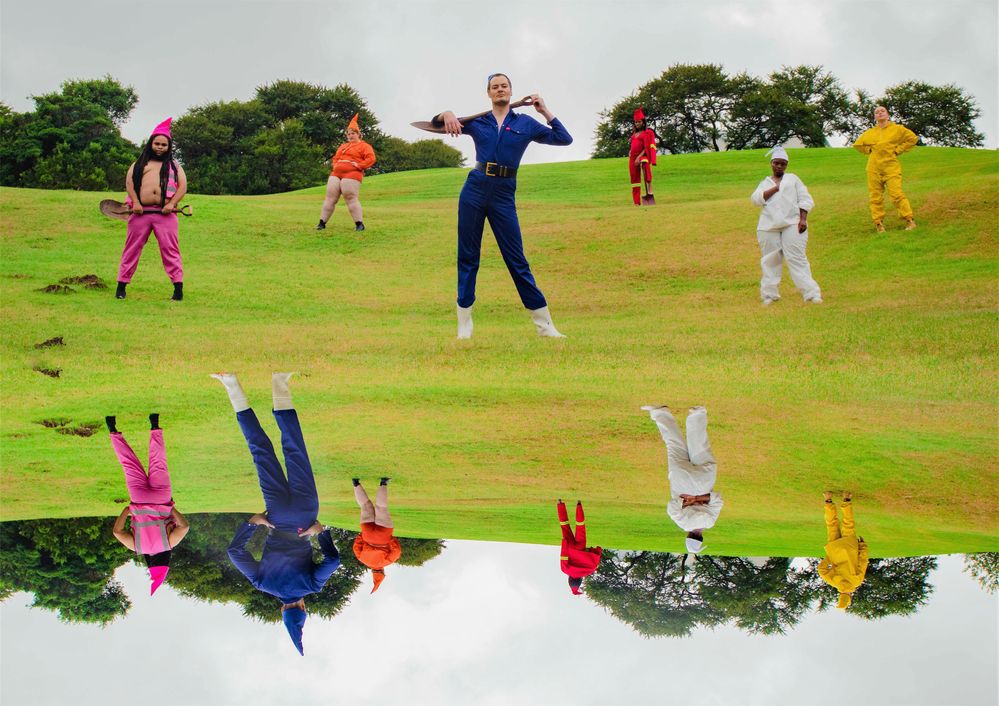 “There was a time when we needed heroes, but in a world rode of magic, I propose an Iawn of garden gnomes instead. A collective of ordinary, queer people who approach acts of service as a kind of love language in an arguably corrupt capitalist economy. And in so doing, we hope to position performance art, as it is traditionally understood, as necessary labour and infrastructure for the public good — because we need performance art as much as we need roads, green spaces, and walkways,” says Gavin Krastin.

The core idea is community empowerment in a bold and creative attempt to spark social change in this whimsical and eye-opening exercise.

Krastin marries his academic acumen with his creative expression. Krastin, is an artist, curator and educator working predominantly in live art performances. He earned a Master of Arts Degree in choreography and performance from Rhodes University’s Department of Drama and is entrenched in the professional performance art space in the country and overseas. He branched out further in 2013 as a lecturer at UCT’s Centre for Theatre, Dance and Performance Studies. In 2018 he returned to his alma mater, Rhodes University as a full-time lecturer.

Expounding on his performance project which debuted on the first Thursday of the National Arts Festival, the theatre-maker and arts educator said: “Well, the work is loosely inspired by the twelve labours of Hercules, but I very much try to queer or subvert it. Labour needs defining, to include those out of work or over-laboured or artists not considered labourers. So, we highlight the notion of gnomes or elves instead. In those five hours, we’re all paid the same regardless of the work we engage in since ordinary people are also extraordinary in some way. We’re just fixing the road. Our labours are not just civic but include the metaphysical and personal.”

The astute practitioner of the stage projects an air of supreme confidence in relaying what his historically derived but pioneering production will offer and aim at.

Gavin who is from Cape Town originally said: “Yes, the LGBTQIA+ community, but also anyone who’s queer and wants a better world and realizes that nobody else will serve it up. Someone at odds with a system that needs recalibrating. The power of the small. Fix the road, pick up some litter. We’re not going to save the world, but we did clean up the bus stop or save some succulent.”

If you are yet to experience what is arguably one of the most enriching artistic experiences in South Africa, this 48th iteration of the festival could be the perfect time to take an unforgettable plunge into the pool of creative potential and prowess our country has in such abundance.

ISSUED ON BEHALF OF STANDARD BANK BY: The Grind PR

Witness all the magic here:

If you would like more information about this year’s festival visit www.nationalartsfestival.co.za