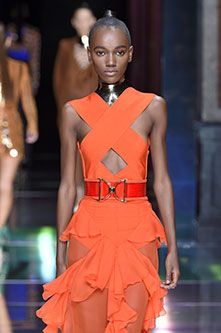 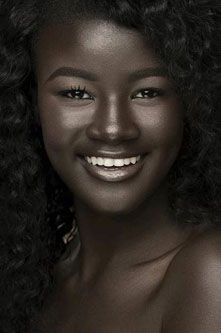 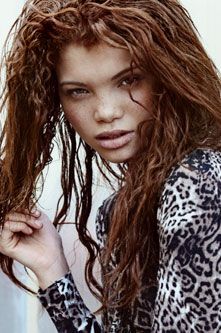 It has been a phenomenally successful year for Tanzanian model Herieth Paul. In February, she was named as a new global spokesmodel for large cosmetics brand Maybelline, and just last month she made her debut as a Victoria’s Secret angel at their spectacular annual fashion show in Paris.

Herieth moved to Canada with her diplomat mother when she was still a teen. There, she was discovered during an agency open call. Often compared to the likes of supermodel Naomi Campbell, she has appeared on the cover of Vogue Italia and Elle, has featured in campaigns for Tom Ford, and has walked the runway for Armani, Cavalli and Diane von Fürstenberg, among others.

Nicknamed “Daughter of the Night,” 19-year-old Senegalese model Khoudia Diop was bullied throughout her childhood because of her dusky skin tone.

The self-dubbed “Melanin Goddess” grew up in France, and is now based in New York.

Within just a few months of starting her Instagram account, she has already garnered thousands of followers praising her flawless skin. #melaninpoppin

Fiery red hair and a flawless freckled face are what give Carmen Solomons her standout look. Represented by Boss Models, the Cape Town-born model’s unique features have propelled her into the international spotlight and caught the eye of bookers throughout the globe.

Carmen was recently booked to shoot a campaign for the popular Kendall & Kylie clothing line, and was later called back to star as one of the faces of Kylie Jenner's new cosmetic range. 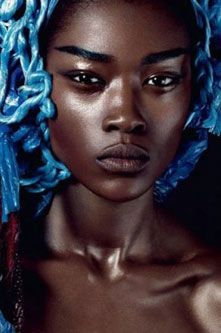 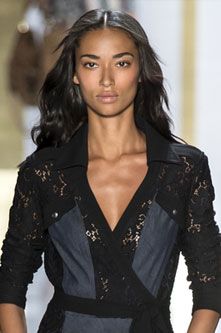 A self-described tomboy, Betty Adewole has already graced the pages of British Vogue, walked the runways for some of fashion’s biggest names, including Tom Ford and Givenchy, and has featured in Beyoncé’s Ivy Park athletic range campaign.

Born to Nigerian parents, the London-based model was scouted while out shopping with her mother when she was just 15 years old.

A natural beauty born to Chadian and Polish parents, Anais has graced the runways in the world’s most prestigious fashion capitals while walking for notable fashion houses like Vera Wang, Marc Jacobs Carolina Herrera and Vivienne Westwood.

The face of Dolce & Gabbana cosmetics and a Victoria’s Secret angel, Mali moved to New York when she was just 18, and has since appeared in numerous editorials, including for Vogue and Allure magazines. While she grew up in France, Anais is now based in New York and has long been outspoken about the lack of representation of black models in the fashion industry.

I think it's great that the fashion industry is expanding. These models are gorgeous, and their eyes are beautiful.

I agree with you. Even though I hate that industry because it applies as much pressure on ordinary girls as on models, some people like it. Many girls are ready to put on eyelash extensions and immediately go to the studio for several hours in front of the camera, so I just hope they're happy. They look stunning, it's undeniable, but is it worth it?

Such a pretty girl! I also like to get in touch with new people online and decided that http://freedatingsites.com.au/ will be just a way for me. There I can meet, chat and to date with different cool people. They are also alone, want to find their soulmate in this severe world.

Does the model in the middle really have such cool eyelashes?

Every occupation has it hazzards. They know what they're in for when they decide to become Super Models. The same theory applies to just about every occupation. The candidate that can showcase the designer's creation as he intends, takes the contract. The world of Super Modeling is what it is. Just as you can't expect from a mechanic to race an F1 super car, you can't expect from a fashion store owner to model those exquisite garments. It is the garments that are showcased, not the person wearing them. If a dark skinned model is necessary for a certain type and colour effect, so be it. And visa versa. I have attended (and participated in some)  fashion shows and  designers  are reverting more and more to blurring out the facial features of models by using excessive make up. It's supposed to be about the creations, not the model. They pay thousands to have their garments showcased and that is what they want the spectators to see

The models are very beautiful and unusual. Well, as for the one in the middle, I'm not sure, but most likely yes, this model has its own eyelashes. If you want about the same, you can try lolaslashes that are glued on a magnet and look natural, but at the same time the look is very bright and noticeable.