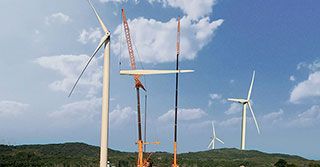 Africa, like the rest of the world, is embracing the era of clean energy. It’s true that the deepening state of climate change and decreasing non-renewable resources, such as coal and oil, leave us with little choice, but many countries on the continent are perfectly suited to take advantage of renewables, and South Africa is no exception.

In late 2015, the Kouga Wind Farm at Oyster Bay in the Eastern Cape was officially opened. The province’s windy weather offers endless opportunities for growth in the renewable energy sector, and the R2 billion wind farm is already adding about 300GWh to the national power grid annually, while also mitigating over 270 000 tons of greenhouse gas emissions a year.

Aside from the obvious environmental and economic benefits, the project’s developers also insist that Kouga uplifts the communities in which it is based:

At the time of Kouga Wind Farm’s opening, MEC for Economic Development, Environmental Affairs and Tourism Sakhumzi Somyo said he was delighted to see that the farm is placing so much focus on development.

Standard Bank was one of three major investors to finance the Kouga Winda Farm, because, as the Bank that sees Africa as our home, we believe it is essential to relentlessly pursue growth in the renewable energy sector. This will help stimulate economic development, support and protect the environment for future generations and ensure long-term sustainable prosperity for all. In short, increased interest in clean energy that can move Africa forward.