The four-star rated, sustainable, A-Grade building, the first phase of which is expected to be completed by 2019, is intended to accommodate all of the bank’s operational departments, ultimately enhancing operations.

Constructed at a cost of close to N$650-million, the building will be located in the emerging hub of Kleine Kuppe, behind the popular Grove Mall, next to Pupkewitz Mega Centre in Chassie Street, Windhoek.

It will contain four floors of 10 500 square meters, and 400 parking bays, consisting of 345 basement parking and 55 on ground level, as well as a private parking section of 1 885 square meters.

The ground breaking ceremony held on 6 April was officiated by Frans Kapofi, the Minister of Presidential Affairs, on behalf of President Hage Geingob, Standard Bank Group Chairman Thulani Gcabashe, as well as Herbert Maier and Jerry Muadinohamba, the Chairman and Deputy Chairman of Standard Bank Namibia. 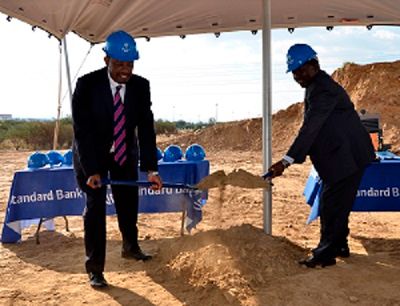 Standard Bank’s executive team prepares ground for construction of the bank's new head office, the first phase of which is scheduled for completion in 2019

Ben Kapofi said the construction of the new head office was a gesture of confidence in Namibia’s economic development and its future.

“Despite headwinds, Namibia’s economic future is sound and stable and the upcoming new Standard Bank head office is just one amongst several indications that speak to the economic development and financial empowerment of our nation.

“I hope that upon completion of construction, this state-of-the-art head office complex will create a more accessible, collaborative, engaging and interactive experience for staff to deliver services to Namibian customers,” he said, speaking on behalf of Namibian President Hage Geingob.

“As the nation enters a period of fiscal prudence and responsibility, in keeping with the goals and objectives in the Harambee Prosperity Plan, I am pleased to note that Standard Bank is committed to facilitating and supporting public and private-sector investments and initiatives. These contributions will ensure that Namibia’s long term outlook remains positive,” he said.

Citing some of the bank’s Corporate Social Investment initiatives, the president further applauded Standard Bank for going beyond the provision of financial services to work to transform the lives of disadvantaged Namibians who live in abject poverty due to unemployment and lack of decent housing.

“I commend Standard Bank for supporting and helping to uplift the communities of the regions in which it operates through its corporate social investment initiatives. It is evident that you have embraced the Harambee philosophy and have met the government halfway in order to address the country’s current housing shortage through projects such as the Buy-a-Brick initiative, which was supported by N$1.4 million donated to the Shack Dwellers Federation of Namibia last year.

“These noble efforts will go a long way in helping to address the shortage of decent housing for our people - an estimated 500 000 Namibians live in informal settlements in the country. Keep up the good work and let’s keep growing our Namibian house – one brick at a time.”

Standard Bank Group Chairman Thulani Gcabashe said construction of the new head office signified the bank’s steadfast commitment to industrialisation in Namibia and elevation of the economy to greater heights.

“Namibia’s stable economy and conducive business environment makes this country an increasing investment and economic hub for the African continent. Standard Bank has been playing its part to foster this economic growth and ultimately, the industrialisation of the economy. The bank has successfully arranged and funded investment deals across various sectors that will enable Namibia to continue its positive growth trajectory despite global and regional headwinds.”

I'm learning all about business in Namibia, so I want to say thank you for sharing this article.

I think this is great news for Namibia because people will get jobs and the opportunity to use the bank's services without intermediaries. But I wonder what the people of Namibia think about it and also, does the bank work or they didn't finish it? If anyone has any recent news, please share it. If we talk about a place to work, I know from personal experience how important it is to have a comfortable workplace, because it gives motivation for work and increases productivity. So I choose the best coworking space for my team that I found on https://osdoro.com.sg/co-working/top-8-coworking-spaces-in-singapore-for-2021/. And I believe that during the business trip to Singapore, we will make a few profitable deals and complete an important project for our company.